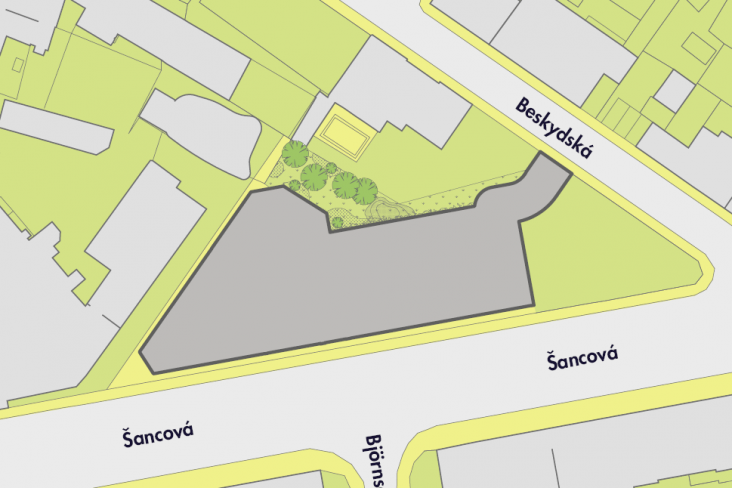 The individual discounts are based on the rules specified with the individual properties on our website: www.finep.cz.

See what premises are currently for rent.

Šancová street is located in Staré Mesto (Old Town) and Nové Mesto (New Town) city quarters of Bratislava. It stretches from the intersection of Štefánikova and Pražská streets up to Trnavské mýto intersection.

The street’s name is derived from the word chance, which originates from the German word Die Schanze, which meant town walls that were situated in this place in the past. Under Socialism, it was named Malinovského ulica in honour of a Soviet army commander Rodion Jakovlevič Malinovskij (1898 – 1967) and on 1st April 1991 it regained its original name.

It is an important communication artery in Bratislava and an attractive locality for living. The transport accessibility to other parts of Bratislava is ensured by the entire network of buses, trolleybuses and trams. Bratislava Hlavná stanica, which is the main railway station in Bratislava, is situated in close proximity to this locality.

The street boasts with several buildings that are national cultural monuments. On Šancová 1, there is a building of the original main railway station built in 1848 erected in the Late Classicism style. The Museum of Transport is located in the building's warehouse. The eclectic apartment house at Šancová 2 was built after 1908. The apartment building at Šancová 4 was built in the 90s of the 19th century in the same style and the apartment building at Šancová 6 was built before 1906. The buildings at Šancová 21-63 form the Unitas residential compound built at the beginning of the 1930s by the architects Fridrich Weinwurm (1884 – 1942) and Ignác Vécsei (1883 – 1944) for the socially poorer sections of the population. These are houses with galleries and with small apartments.

Thanks to its position, this locality belongs among the sought-after and attractive addresses for a full-enjoyment city life. It provides its citizens with decent amenities. You can get anywhere from there on foot very quickly and easily – to the Žilinská marketplace or to the historical centre, to the Presidential Palace or to the Central shopping centre.

One of the great benefits of this locality is the proximity of the Mountain Park and Koliba. Horský park (Mountain Park) is a Bratislava’s city park located in the Staré Mesto city quarter. Unlike other Bratislava’s parks, the Mountain Park is specific because it is practically in the centre of the city, yet it has almost untouched environment and original flora and fauna. Koliba is a popular place for people looking for relaxation, hiking or cycling. It is located at the foot of Malé Karpaty (Little Carpathians). On the outskirts of Koliba, it is in its vicinity, there is the Kamzík hill and the Kamzík TV Tower. Koliba is primarily known thanks to film studios, which you can find there too. The cable railway leading from Železná studienka to Koliba, which is designed for hikers and cyclists, was reconstructed in 2005.

If you're interested in this locality, Finep now has a unique opportunity for you – you can find your home within the Premiere project on Šancová street. Have a look at our offer and choose your favourite apartment at a great address.